As I join fellow HSCT warriors in celebrating publication of Dr. Burt’s Phase II Clinical Trial (the one I hoped to be a part of, was approved for, but when enrollment closed I was instead treated off study (because insurance denied me) according to study protocol – because he couldn’t treat me otherwise) … I’ve been reviewing what I can of the abstract (noted as Preliminary Communication) and the JAMA issue in general, and I have some thoughts… 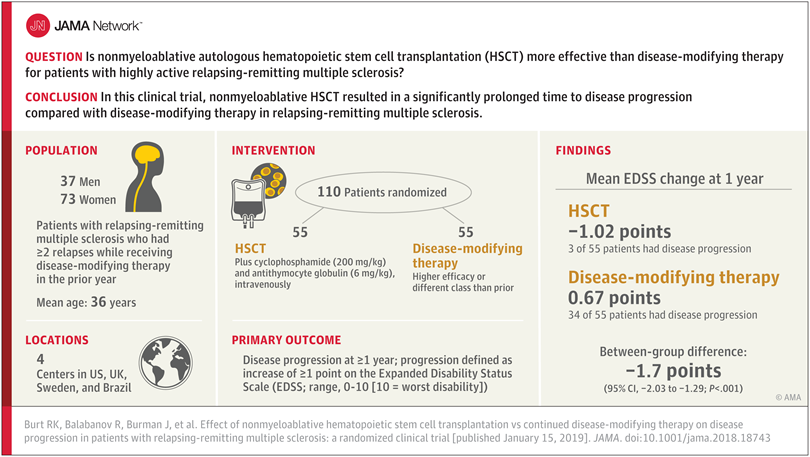 We are super excited for JAMA to publish these findings because we know they help validate the superiority of HSCT over disease-modifying therapy (DMT). Although the visual abstract doesn’t do the findings justice, and the title reads boring, and JAMA restricts access to the full article beyond this “Preliminary Communication”, my observations follow.

As noted in the abstract released online:

Meaning: In this preliminary study, nonmyeloablative HSCT was more effective than disease-modifying therapy for patients with relapsing-remitting MS” (Burt, et al., 2019) [i].

Great news, right?!?! Kudos to Dr. Burt and his team at Northwestern Memorial in Chicago; Upsala, Sweden; Sao Paulo, Brazil; and Sheffield, England!! A thousand times, thank you for your commitment and dedication to researching HSCT and providing such a transformational opportunity to halt the progression of autoimmune disease. Words just don’t suffice to express the abundance of gratitude! 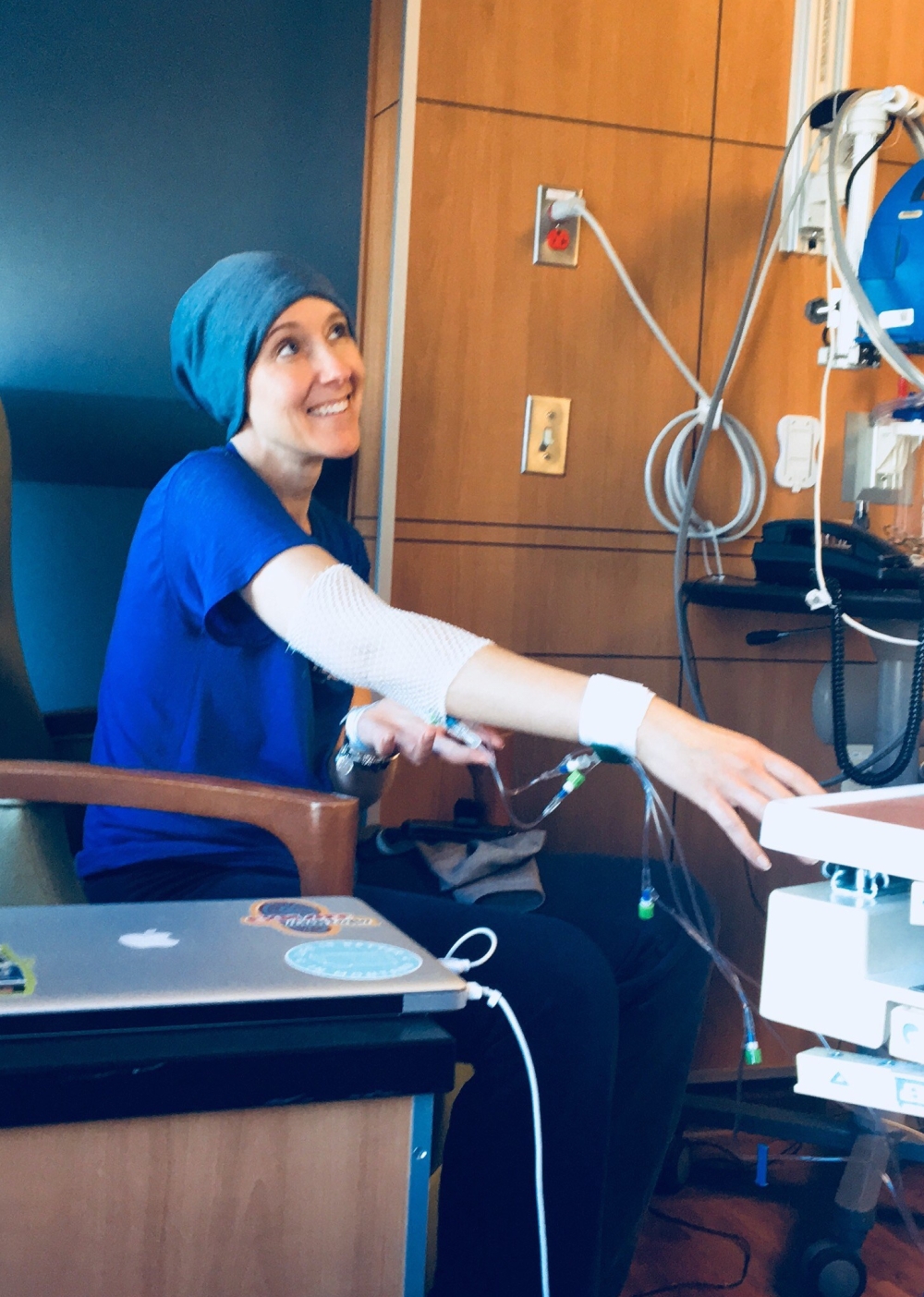 Interestingly, this journal edition includes additional articles and editorials themed around treatments for Multiple Sclerosis; some articles seem to highlight the efficacy of disease-modifying therapies, focused on traditional pharmaceuticals.

Critiquing a publication by Brown[ii], et al., one editorial notes: “…despite the positive effect on progression achieved by immunotherapeutics, we are not yet ready to declare victory. Even over modest time scales, a significant percentage of patients still exhibited progression despite receiving the most robust adaptive immune targeting agents available” (Green, A.J., 2019)[iii].

It occurred to me after reading the editorial that it remained unclear whether the author’s opinion favors HSCT, or is an attempt to light a fire under pharmaceuticals to come up with better options; “Additional definitive, unequivocal evidence specifying the robustness of immunotherapeutic agents on the long-term course in MS are yet to be completed. However, the ditherers must take note. The signs are strongly pointing to the benefits of early and aggressive treatment to forestall damage. Waiting on the sidelines does not appear justified” (Green, A.J., 2019).

While I concur that waiting on the sidelines is never a good idea – especially with aggressive disease – it is often what we warriors are forced to do as we await insurance approval. Thank goodness for phenomenal doctors – like Dr. Richard Burt – who agree to treat patients they know they can help. Thank goodness for generous friends and family who contribute more than $115,000 to help someone like me to end suffering. Thank goodness for organizations like the AIMS Charity that exist to help fund travel expenses for UK citizens who are seeking HSCT (learn more about it in an upcoming episode of the HSCT Warriors Podcast!).

Conflicts of interest noted at the end of this editorial include the reality that: “Dr Green served on scientific advisory boards or trial execution committees for MedImmune (VielaBio), Novartis, Inception 5 Sciences, Pipeline, and Bionure; holds a patent for remyelination molecules and pathways; received research support from Novartis, Inception Sciences, National Institute of Neurological Disorders, National Institute on Aging, National Institutes of Health, National Multiple Sclerosis Society, Sherak Foundation, and Hilton Foundation; and served as an expert witness in Mylan Pharmaceuticals vs Teva Pharmaceuticals.”

While it is important for physicians to clarify their conflicts of interest, reading them reminded me of the many appeal letters that have been submitted to insurance, pleading for coverage – not just by me, but so many other warriors – and the continued denial by random board-certified doctors (allergists or whomever was on shift to review appeals on any particular day) who have very little clue about HSCT or the mounting evidence that it is the ONLY available treatment that actually halts autoimmune disease, and the ONLY treatment evidencing reversal of symptoms. Admittedly, some drugs are shown to SLOW disability progression[iv], yet no drug has been shown to STOP progression, let alone REVERSE it. As HSCT for autoimmune disease has been part of so many clinical trials in the past 20 years, the growing evidence published around the world should be indication alone that the treatment is safe and should not be considered experimental.

Yet insurance continues to deny coverage… which begs the question, “Why do insurance companies, rather than the doctors who know me as an individual human being, have any power or influence to decide what treatment is best?”… or, “Why would anyone elect to pursue aggressive chemotherapy if they weren’t absolutely certain it was their only best option?”… not that I expect to find any real answers…

No one should suffer unnecessarily with an autoimmune disease if HSCT is an option that could help them.

Hopefully the powers that be at the FDA will finally come around to the idea that HSCT should be offered as a standard-care protocol… if not for anyone newly diagnosed, at least for the individuals with aggressive presentation of their autoimmune disease.

Cheers to the possibility of a future free from disease progression, to Dr. Burt and his team, to my friends and family that have supported me along the way, and to every HSCT Warrior out there… may you be well on your journey!